Ganglion Cysts - What You Need to Know

Ganglion Cysts - What You Need to Know

My foot doctor says that the lump on my foot is a ganglion cyst.  Where does it come from?

A ganglion cyst is a benign tumor or “lump” that commonly occurs on both feet and hands. It arises in association with either a joint or a tendon both of which have tissue which produce fluid similar to what is found in a ganglion cyst.  Often they are associated with an injured tendon or arthritic joint. Sometimes they seem to develop on their own. 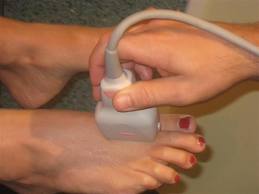 Typically, a patient will complain of a lump which has been present for some time but which seems to get larger toward the end of the day and sometimes seems to come and go.  It may or may not be painful depending on the location and what other structures it may be exerting pressure upon.  They are usual firm, sometimes almost squishy and slightly mobile.  Average size tends to run approximately 2.0 cm.  They are not typically found on the bottom of the foot.  Women tend to have a higher incidence of these lesions. X-rays and ultrasound examination may be used to help identify and better visualize the extent of the cyst.

Treatment may briefly consist of shoe gear modification, use of Aleve, Ibuprofen or similar medicine but is usually, eventually, surgical.  In days past, such cysts on the wrist might have been struck with a heavy book which would rupture the cyst and cause its contents to be eventually resorbed. This is not recommended as it is important to confirm a ganglion cyst with a biopsy as many other “lumps” may mimic the appearance and symptoms of a ganglion cyst.  Typically, the area containing the cyst is anesthetized and then aspiration of the contents of the cyst is performed using a large diameter needle.  A cortisone injection may be performed at this point to encourage regression.  Unfortunately there is a high recurrence rate for these cysts when treated with aspiration and injection.  Recurrence is also relatively high following surgical excision.

The usual content of a ganglion consists of a gelatinous, clear or sometimes slightly golden material which can also be manually expressed once the cyst is punctured.  This material is sent to pathology to help confirm the diagnosis.  If the pathology report is not able to confirm the diagnosis, the lesion should be surgically excised.

Surgery for these lesions is usually outpatient.  It does require some degree of immobilization with healing of an incision for 10-14 days and depending on the size and location of the lesion, a return to normal activities in 2-4 weeks. Call or submit and appointment request today if you feel you may have a ganglion cyst in need of examination.