What is ankle instability and how do we treat and prevent its development? There are two types of instability, mechanical and functional. In order to properly explain each type, a basic understanding of the structures involved is necessary. The ankle is a complex arrangement of tendinous, ligamentous, and boney structures, but to obtain a relative understanding of mechanical and functional instability the lateral ankle ligaments are most important. Three ligaments compose the lateral collateral ligaments of the ankle; the anterior talofibular ligament (ATFL), the calcaneofibular ligament (CFL), and the posterior talofibular ligament (PTFL). The ATFL is the weakest of the three ligaments but also the most important in regards to lateral ankle stability. 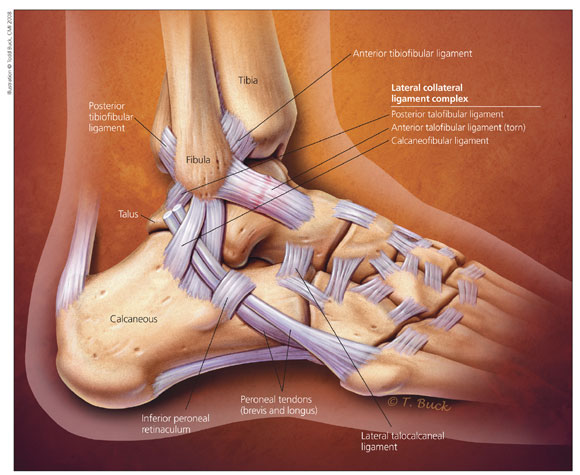 Mechanical instability is the actual rupture or stretching of the ligamentous structures, namely the anterior talofibular ligament. This is an objective, clinical finding. This is often determined by a test known as the anterior drawer test. The ability to manually anteriorly translate the ankle is a positive anterior drawer sign.

Management of lateral ankle instability may occasionally involve surgical reconstruction, but typically always involves a functional rehabilitation program. In essence, the treatment of instability ought to begin with the first acute injury. Less than 10% of patients with an acute injury will ever need surgical stabilization at a later stage in life if initially treated appropriately. Functional rehabilitation or early controlled movement involves a close relationship between the foot and ankle specialist and their local physical therapist.

Lateral ankle instability is, unfortunately common and can have devastating long term consequences. However, a proper understanding of the lateral ankle can assure prompt, appropriate management. Ankle injuries,specifically lateral ankle sprains, will always be prevalent as our population remains active, but instability, on the other hand, does not have too. You have likely heard it said that when one part of the body suffers, the rest suffers as well. This could not be truer with the foot and ankle. When the foundation is not stable, the remaining structure soon collapses.